ALUMNI OF TONY® AWARD-WINNING BROADWAY REVIVAL TO HEADLINE ONCE ON THIS ISLAND IN HOUSTON. 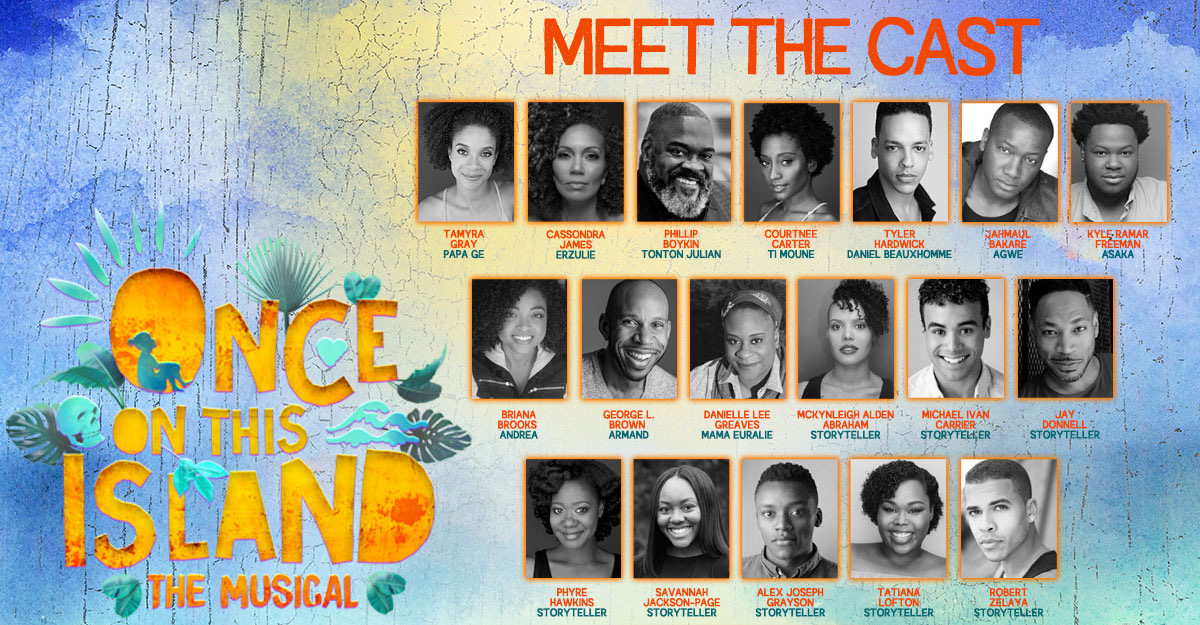 “RAVISHING! WHAT A BIG, BOLD DELIGHT IT IS TO ENTER THE WORLD
OF ONCE ON THIS ISLAND.”

Theatre Under The Stars announces the cast of the upcoming engagement of the Tony Award®-winning revival of Once On This Island. The North American Tour appears at the Hobby Center for the Performing Arts from Feb. 18 to March 1. For ticketing information, visit TUTS.com.

Cast members from the 2017 Broadway revival of Once On This Island lead the touring company, including “American Idol” Alum Tamyra Gray as Papa Ge, Cassondra James as Erzulie, Tony Nominee Phillip Boykin as Tonton Julian, Courtnee Carter as Ti Moune and Tyler Hardwick as Daniel Beauxhomme. Completing the gods of the island are Jahmaul Bakare as Agwe and Kyle Ramar Freeman as Asaka.

“This company of Once On This Island is truly an embarrassment of riches for me as a director. I cannot wait for audiences across the country to witness this group of incredible actors transport them to our island,” says Tony Award Nominated director Michael Arden.

Winner of the 2018 Tony Award for Best Revival of a Musical, Once On This Island is the sweeping, universal tale of Ti Moune, a fearless peasant girl in search of her place in the world, and ready to risk it all for love. Guided by the mighty island gods, Ti Moune sets out on a remarkable journey to reunite with the man who has captured her heart.

The groundbreaking vision of two-time Tony Award nominated director Michael Arden (Spring Awakening revival) and acclaimed choreographer Camille A. Brown (NBC’s Jesus Christ Superstar Live) conjures up “a place where magic is possible and beauty is apparent for all to see!” (The Huffington Post). With a score that bursts with life from Lynn Ahrens and Stephen Flaherty, the Tony Award-winning songwriters of Anastasia and Ragtime, Once On This Island is a timeless testament to theater’s unlimited possibilities.

Once On This Island premiered at Playwrights Horizons in May of 1990. The original Broadway production opened in October of that year and ran for 469 performances garnering eight Tony nominations including Best Featured Actress (LaChanze), Best Original Score, Best Book of a Musical and Best Musical. The 1994 West End Production won the Olivier Award for Best New Musical. The critically acclaimed 2017 Broadway Revival, which opened in December of that year, won the 2018 Tony Award® for Best Musical Revival before closing January 6, 2019.