THE CURTAIN WILL RISE AGAIN!
SUPPORT THE FUTURE OF MUSICAL THEATRE IN HOUSTON.

This New York Times Critics’ Pick takes you into the heart of the remarkable true story of 7,000 stranded passengers and the small town in Newfoundland that welcomed them. Cultures clashed and nerves ran high, but uneasiness turned into trust, music soared into the night, and gratitude grew into enduring friendships. Don’t miss this breathtaking new musical written by Tony nominees Irene Sankoff and David Hein, and helmed by Christopher Ashley, winner of the 2017 Tony® Award for Best Director.

Rock of Ages takes you back to the time of bands with big egos, big guitar solos and even bigger hair! Featuring the music of hit bands including REO Speedwagon, Pat Benatar, Twisted Sister, Bon Jovi, Styx and Journey, this hit musical was nominated for five Tony Awards including Best Musical.

Direct from the American Repertory Theater at Harvard University and Roundabout Theatre Company on Broadway, this production reexamines a pivotal moment in American history in a re-imagining of the Tony Award-winning musical 1776.

Based on the hit film, Sister Act is the feel-good musical comedy smash that has audiences jumping to their feet! Featuring original music by Tony and eight-time Oscar® winner, Alan Menken (Newsies, Beauty and the Beast, Little Shop of Horrors), this uplifting musical was nominated for five Tony Awards, including Best Musical.

Based on one of Hans Christian Andersen’s most beloved stories and the classic animated film, The Little Mermaid is a hauntingly beautiful love story. With music by eight-time Academy Award® winner, Alan Menken, lyrics by Howard Ashman and Glenn Slater and a compelling book by Doug Wright, this Broadway gem will capture your heart with its irresistible songs, including “Under the Sea,” “Kiss the Girl” and “Part of Your World.”

More timely than ever, this Rodgers and Hammerstein landmark musical proves that even the backdrop of a tropical paradise cannot shelter its residents from the prejudices of World War II. South Pacific is the winner of the 1950 Pulitzer Prize for Drama and 10 Tony Awards, including Best Musical. 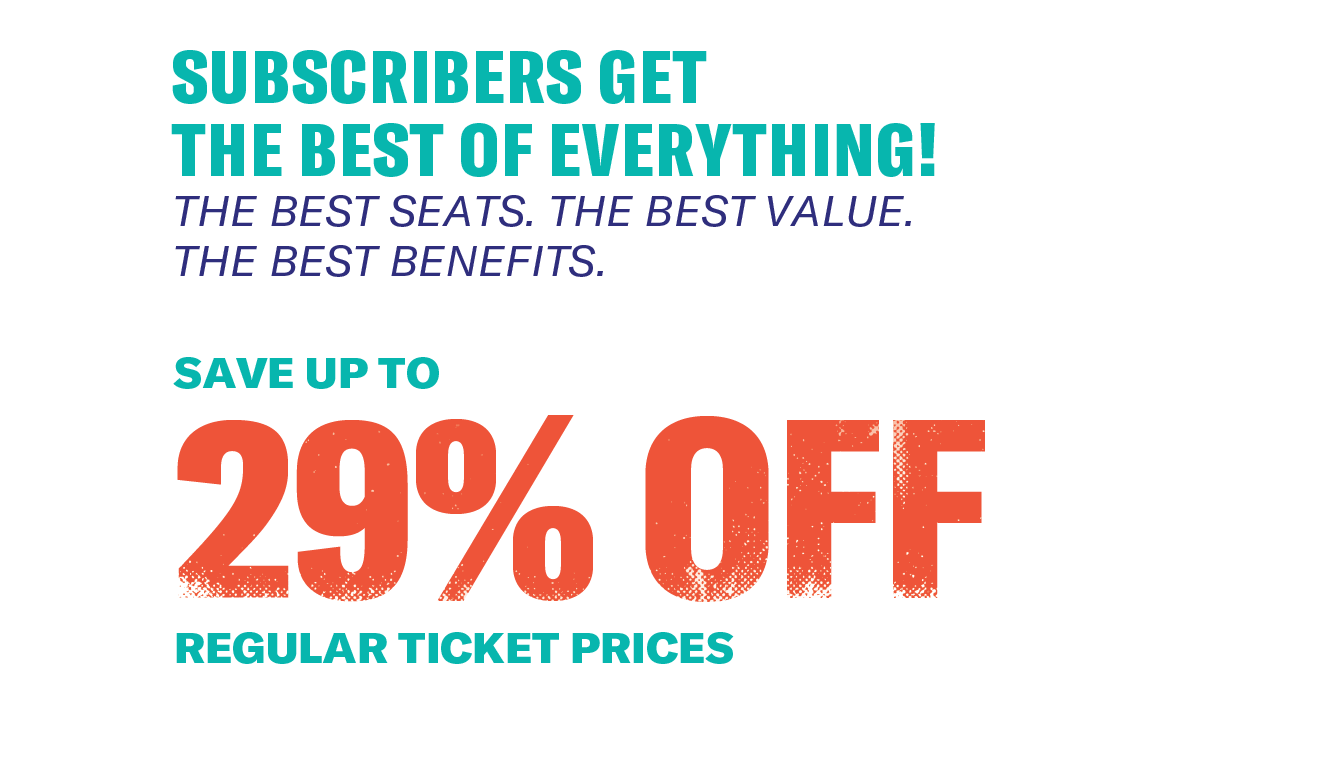 Get seated before tickets go on sale, and save up to 29% off regular ticket prices. You’ll experience the same great seats for every performance, and six-show subscribers may renew the same seats for future seasons — or move to the front of the line for seating upgrades!

Exchange your seats into another performance of the same musical, no additional fees.

Exchange your seats for one show into another production, once per season.

Save on additional seats for family and friends, and get early access before tickets go on sale to the public.

No need to worry about lost tickets with our subscriber ticket replacement services.

Save 10% at Encore, our Broadway boutique located in the Hobby Center.
Save 10% on student enrollments at the Humphreys School of Musical Theatre and The River.
Advance access to seats for special TUTS events.

Support the mission of TUTS, a non-profit organization, and get great additional benefits. Donor Club subscribers receive access to premium seating, behind-the-scenes VIP experiences, complimentary parking passes and discount beverage coupons, plus all of the benefits of a traditional season package.