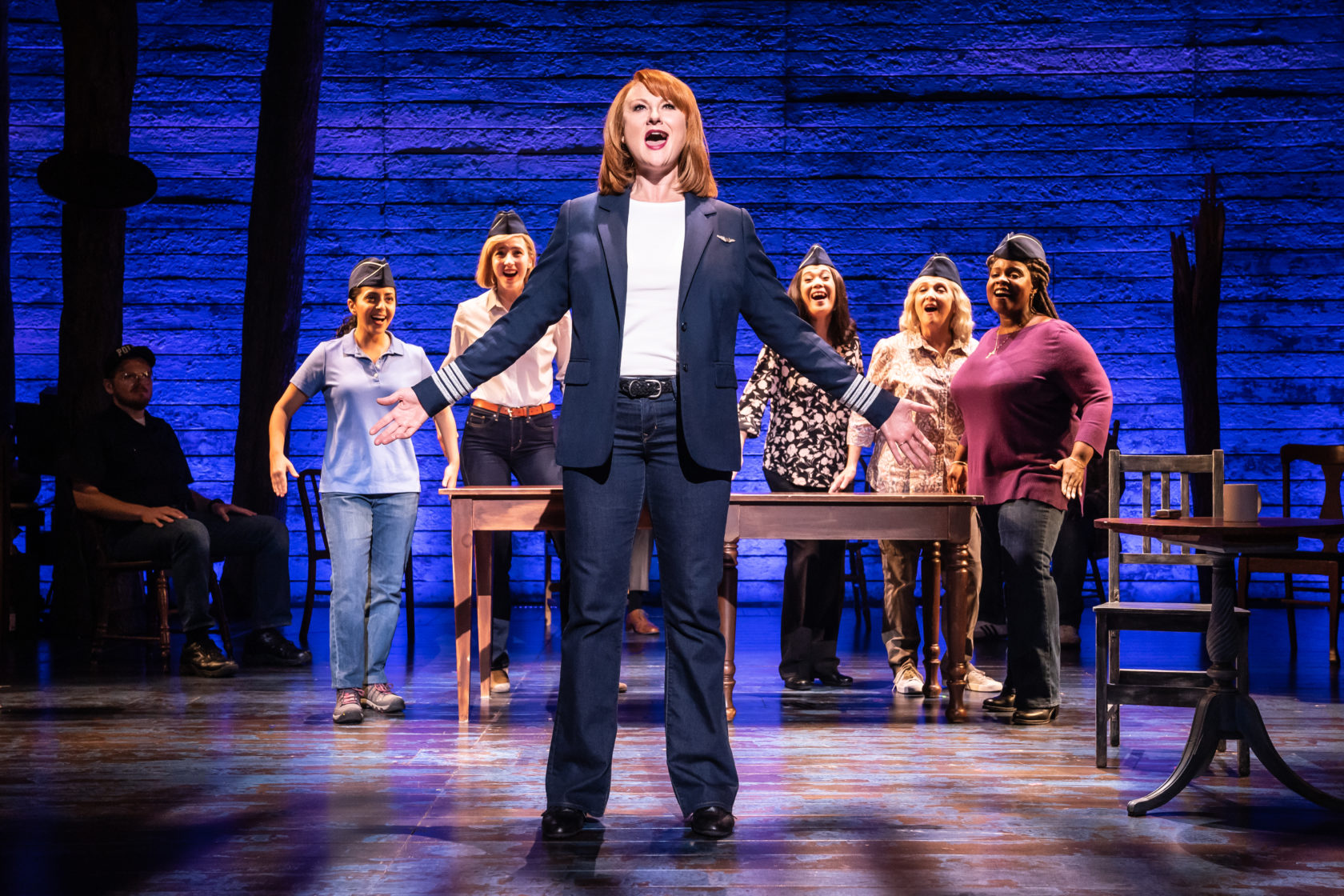 This morning, Theatre Under The Stars announced the Houston return of Come From Away as the final musical in its 2020-2021 Season of Broadway hits. The North American Tour of the Tony Award®-winning musical just completed a sold-out run at the Hobby Center. The TUTS engagement will run May 18 through 30, 2021.

“We’re so excited to bring this phenomenal musical back to Houston next year as part of our season, because more Houstonians deserve to experience this uplifting and inspiring show,” said TUTS Artistic Director Dan Knechtges. “Come From Away is a remarkable true story that celebrates the best in humanity, and our audiences will love it.”

Recapping the shows previously announced for the 2020-2021 Season, the six-show series at Houston’s Hobby Center will launch in September with the highly-anticipated Broadway revival of 1776, prior to its arrival in New York City. In October, the ‘80s live again with an all new TUTS production of Rock of Ages, featuring your favorite hair-metal hits. For the holidays, go under the sea with a new production of Disney’s The Little Mermaid. TUTS revives a musical classic in February, with Rodgers & Hammerstein’s South Pacific. April brings the divine musical comedy Sister Act, starring Houston’s own Simone Gundy (NBC’s The Voice, TUTS Memphis). The return engagement of Come From Away will round out the season.

“What excites me about this season, is the range of experiences this line-up offers. Pre-Broadway! Rock Concert! Disney Spectacular! High Romance! Disco Diva! Broadway Smash!” said Knechtges. “You can’t do better than that for a night on the town. This season, you’ll be entertained and transported to musical theatre heights.”

Direct from the American Repertory Theater at Harvard University, visionary director Diane Paulus reexamines a pivotal moment in American history in a re-imagining of the Tony Award®-winning musical 1776 prior to its Broadway engagement at Roundabout Theatre Company.

They knew they would make history, but not what history would make of them. Fed up with living under the tyranny of British rule, John Adams attempts to persuade his fellow members of the Continental Congress to vote in favor of American Independence and sign the Declaration. But how much is he willing to compromise in the pursuit of freedom? And to whom does that freedom belong?

Rock of Ages takes you back to the time of bands with big egos, big guitar solos and even bigger hair! Featuring the music of hit bands including REO Speedwagon, Pat Benatar, Twisted Sister, Bon Jovi, Styx, and Journey, this hit musical was nominated for five Tony Awards® including Best Musical.

Set at the end of the 1980s in one of the Sunset Strip’s last legendary venues, a place where superstar Stacee Jaxx takes the stage and groupies line up to turn their fantasies into reality. Amidst the madness, aspiring rock star — and resident toilet cleaner — Drew longs to take the stage as the next big thing. He falls for Sherri, a small-town girl, fresh off the bus from Kansas with stars in her eyes. But the rock and roll fairytale is about to end when developers sweep into town with plans to turn the fabled Strip into just another strip mall. Can Drew, Sherri, and the gang save the strip and themselves before it’s too late?

Based on one of Hans Christian Andersen’s most beloved stories and the classic animated film, The Little Mermaid is a hauntingly beautiful love story. With music by eight-time Academy Award winner, Alan Menken, lyrics by Howard Ashman and Glenn Slater and a compelling book by Doug Wright, this Broadway gem will capture your heart with its irresistible songs, including “Under the Sea,” “Kiss the Girl” and “Part of Your World.”

More timely than ever, this Rodgers and Hammerstein landmark musical proves that even the backdrop of a tropical paradise cannot shelter its residents from the prejudices of World War II. South Pacific is the winner of the 1950 Pulitzer Prize for Drama and 10 Tony Awards, including Best Musical.

Set in an island paradise during World War II, two parallel love stories are threatened by the dangers of prejudice and war. Nellie, a spunky nurse from Arkansas, falls in love with a mature French planter, Emile. Nellie learns that the mother of his children was an island native and, unable to turn her back on the prejudices with which she was raised, refuses Emile’s proposal of marriage. Meanwhile, the strapping Lt. Joe Cable denies himself the fulfillment of a future with an innocent Tonkinese girl with whom he’s fallen in love out of the same fears that haunt Nellie. When Emile is recruited to accompany Joe on a dangerous mission that claims Joe’s life, Nellie realizes that life is too short not to seize her own chance for happiness, thus confronting and conquering her prejudices.

Based on the hit film, Sister Act is the feel-good musical comedy smash that has audiences jumping to their feet! Featuring original music by Tony and eight-time Oscar winner, Alan Menken (Newsies, Beauty and the Beast, Little Shop of Horrors), this uplifting musical was nominated for five Tony Awards, including Best Musical. In addition to music by Menken, the musical features lyrics by Glenn Slater, and book by Cheri Steinkellner and Bill Steinkellner. Simone Gundy (NBC’s The Voice, TUTS Memphis) will star in this TUTS premiere.

When disco diva, Deloris Van Cartier, witnesses a murder, she is put in protective custody in the one place the cops are sure she won’t be a found: a convent! Disguised as a nun, she finds herself at odds with both the rigid lifestyle and uptight Mother Superior. Using her unique disco moves and singing talent to inspire the choir, Deloris breathes new life into the church and community but, in doing so, blows her cover. Soon, the gang is giving chase, only to find them up against Deloris and the power of her newly found sisterhood.

DON’T MISS THE RETURN OF THIS SMASH BROADWAY HIT!
PRESENTED IN HOUSTON EXCLUSIVELY BY THEATRE UNDER THE STARS

Broadway’s Come From Away is a Best Musical winner all across North America!

This New York Times Critics’ Pick takes you into the heart of the remarkable true story of 7,000 stranded passengers and the small town in Newfoundland that welcomed them. Cultures clashed and nerves ran high, but uneasiness turned into trust, music soared into the night, and gratitude grew into enduring friendships.

Don’t miss this breathtaking new musical written by Tony® nominees Irene Sankoff and David Hein, and helmed by this year’s Tony-winning Best Director, Christopher Ashley. Newsweek cheers, “It takes you to a place you never want to leave!”

Tickets for Theatre Under The Stars 2020/21 Season are currently only available by subscription. Season ticket holders enjoy a variety of perks including first access to seats, complimentary ticket exchanges, and savings on additional seats. Visit TUTS.com/subscribe or contact call 713-558-8887 to learn more.